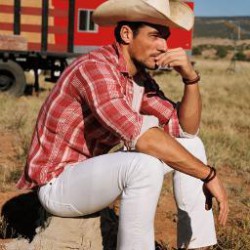 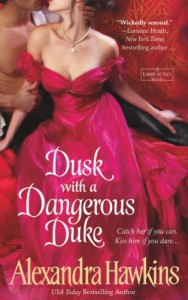 As my very first book by Alexandra Hawkins, I have very excited to dive into this book and be swept away by the Lords of Vice. Unfortunately, the premise of this book didn’t work for me. Promised to each other at a very early age, the Duke of Huntsley and Lady Grace Kearly are set to be married. For most of their lives, they have ignoring each other but if Hunter hopes to keep his inheritance, he needs to man up and catch his bride. What makes matters worse is that Lady Grace decides that she doesn’t want to be married to a man who hasn’t come for her after nineteen years. Little does she know that Hunter has been looking for her, intending to marry her but can’t seem to catch her.

I read this book very quickly. Hawkins’s writing is effortless, free-flowing and very eloquent. It made for a very easy read. The dialogue is enjoyable and I really loved the idea of the Lords of Vice – seven men who are as naughty as the name seems. However, the big problem for me was the believability. I couldn’t grasp the fact that everyone else knew that the Duke of Huntsley and Lady Grace were betrothed, but that neither the hero nor the heroine knew each other. Wouldn’t they have crossed paths before and wouldn’t others direct them to each other?

The first time the hero and heroine meet, they have incredibly chemistry but I don’t think I could invest myself in the storyline because they were still virtually strangers. For much of the book, Lady Grace evades Hunter and I think that hindered the romance a lot. Half of the book passed and yet the romance was just simmering and hadn’t reached a speed that would be enjoyable to readers. If the heroine doesn’t want the hero, how can a reader desire him as well? Because of that, I felt that the romance lacked a bit and the resolution seemed too swift and easy in the end. I simply couldn’t invest in it.